Cheap International Calls from the US to Africa

The ability to talk to your loved ones can be priceless - but when international borders are involved, the minutes (and dollars!) soon start adding up. Taxes on inbound calls to Africa are among the highest in the world, and this trend doesn’t show any signs of reversing. Don’t let overseas politics prevent you from keeping in touch - read on for a rundown on making that call to Africa without breaking the bank. 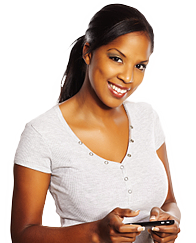 According to the US Census Bureau, the African-born population in the United States has doubled every decade since 1970, with figures currently at around 1.6 million. Many of these immigrants came to the U.S. to pursue careers that allow them to provide support for their families back in Africa.

Consequently, keeping in touch with loved ones is an important part of life, but the downside here is that many African nations have mobile taxation rates that are nearly double the global average - and when you combine high tax rates with hidden fees and monthly charges, it's easy to see how calls to Africa can become a problematic expense.

Africa Calling Rates on the Rise

Below is a brief breakdown of a few major providers’ calling rates to four different African countries. These prices represent mobile termination rates, but don’t factor in any of the hidden fees, surcharges, or taxes that can add up on your monthly phone bill. 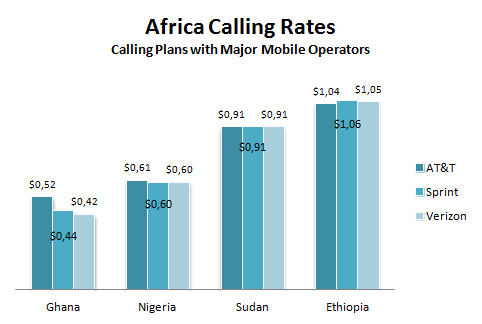 Connect with Loved Ones, without Breaking the Bank

Fortunately, there are plenty of budget-friendly options for making international calls to Africa. Phone cards are widely available, portable, and easy to manage, and the low price point makes them an attractive option for customers who want a more flexible solution to monthly international plans. AT&T calling cards reduce your rate per-minute to an average of $0.22. Sprint and Verizon cards are priced similarly, at around $0.20-$0.30 per-minute for calls to Africa.

Even better than the above, modern smartphones and computers offer a wealth of options in the form of downloadable applications and online services that allow families to keep in touch without spending an arm and a leg.  By downloading a simple app for companies like Rebtel, Skype, Vonage, and Tango you can benefit from some of the more affordable pricing as indicated in the chart below.

Embracing the development of smartphone and tablet technology can really help you stay in touch for longer, while saving you significant amounts of cash.