Best way to call South Africa from the UK

When looking to make cheap calls to South Africa, where is the best place to start? Calling direct from your mobile phone using a standard tariff can incur huge costs and while there are often better subscriptions available on request from major UK mobile phone operators, cheaper options do exist.  Here is a breakdown of some alternatives.

Companies like Lycamobile or Lebara Mobile have traditionally offered much better deals than the normal operators when you are looking to make calls to South Africa, with rates around 15p per minute.

The down side is that you need to switch SIM cards which is not always convenient.  Some phones may not accept different SIMs (if they are ‘locked’ to a network) meaning that users would need to carry a second mobile phone.  This again raises questions in terms of both practicality and cost.  Unfortunately, while new phones with the capability for dual SIM cards are widely available in the Asian market, they are not so in Europe at present.

Certainly, using top up services works out cheaper than SIM cards, but they do have some downsides. One is that users have to top up their account via text message for a set fee of £5 (the first time you do this can start off a recurrent billing process, which is not always what the user requires, so beware).

Another issue is that top up providers only allow calls through an access number. This number is dialled first, followed by your contact’s mobile number, which does make calling a somewhat long and drawnout process.

The boom in smartphone technology means that an abundance of services are now offering ‘Apps’ to their users. These apps are much cheaper than other methods of calling as they use digital technology (over the internet) instead of Satellite.  In terms of value for money and securing the best deal, it is apps which are offering the best possible prices when it comes to making calls to South Africa from UK mobiles. Below are a few examples, with prices averaged over the last two years. 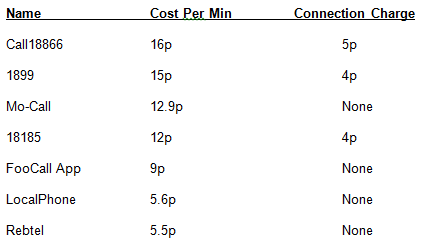 Below is another breakdown, comparing a leading SIM provider, Top-Up service and smartphone App, all of which are significantly cheaper than the rates with standard mobile phone operators.

Smartphone Apps really do allow users to take control and manage their international calling and are the preferred method of communication in terms of price and convenience. You can check out Rebtel’s rates to South Africa for further information and to ensure that your calls back to South Africa are free of connection fees, with high call quality and a low impact on your wallet.

Of the three types of provider, apps tend to offer by far the best value over the longer term as some, such as Rebtel, are almost a third cheaper than other providers and have no connection fees, as well as high quality local lines ensuring a quality service at the lowest possible price.