The Complexity of Incoming Call Charges in North America

It wasn’t always this way. For years, many phone companies advertised free incoming calls. However, as networks expanded and calls between clients of different carriers increased, it became more necessary to cover the interconnection and transport costs for these calls.  Some operators have recently reduced some of their rates so we strongly recommend you check with your operator and prepare yourself accordingly.

How They Charge You for Incoming Calls

In contrast, in the US and Canada there are no specific “cell-only” prefixes and area codes - in other words, a cell number in the US or Canada looks no different than a landline number. Calls terminating at a cell number still cost more than those terminating at a landline, but having to track and bill separately for calls to cell numbers is impractical. As a result of this, phone operators turned to billing incoming calls to the receiving party, since landline plans included free local calls, and more and more “local” numbers were assigned to cells.

With most phone operators offering either monthly calling plans with a specific number of minutes or pre-paid options, it’s simple for carriers to bill incoming long distance or international calls at a higher rate - either adding charges to the bill at the end of the month, or charging a higher “minute” rate (such as a minute of international call time being counted as three minutes of normal call time.)

Incoming Call Rates Depend on your Geographical Location

The physical location of the cell phone when it makes or receives a call determines whether it is considered “long distance”. For example, if your phone has the area code 416 (Toronto, Canada) but you are visiting area code 604 (Vancouver, Canada), all calls made to and received from 604 numbers will be local and calls from and to area code 416 will be long distance - as long as the phone is in the 604 area. 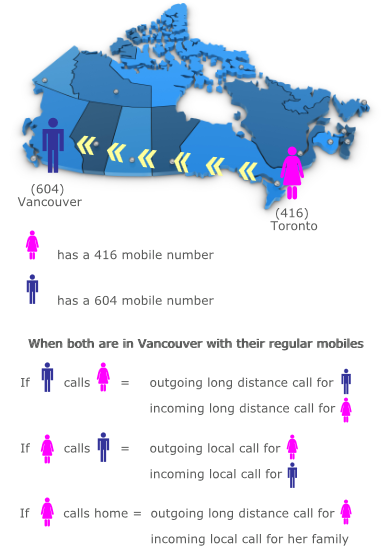 When the phone returns to the 416 area, 416 calls will return to being local and 604 will be long distance.

Likewise, a phone with a 903 area code (eastern Texas) that is relocated to a 770 area code (northern Georgia) will be charged more for calls originating from the 903 area while calls received from 770 numbers will be considered local. This applies because local carriers are the ones picking up and transporting the signal, so calls are billed according to the location of the cell phone, not its assigned area code.

Confused?  Sure, it’s pretty complicated to get your head around, and that’s just considering long distance domestic calls.  It boggles the mind further when looking at international calls!  We need a solution and fortunately the dawn of the smartphone/tablet era has become our savior.  Read on to learn more…

While most carriers default package will charge customers on a call by call basis, many offer national long distance or international calling plans as well.  These act as add-ons that absorb the cost of incoming calls in exchange for a monthly billing commitment. In other words you pay an extra flat sum per month in exchange for an allowance on incoming calls from long distance/abroad.

Better still, since the app market for smartphones and tablets is booming, there are plenty of other ways to stay in contact.  By browsing this International Calling Guide further you can find countless ways of staying in touch, specific to your particular device.  Options range from simple text based messaging to free app-to-app calling and some great options for cheap worldwide calls to any landline/cell phone.

One such option is Rebtel, which offers the advantage of being able to call both long distance and internationally on a landline or cellphone at the price of a local call.  Calls can also be made and received via wi-fi  and costs kept low by keeping data plans turned off.

Get ahead of the game and check out the app market for further ways to avoid these exceedingly high rates. Break the mold and avoid having to pay when receiving a long distance phone call.